shaded relief image shows the extent of digital elevation data for Africa recently released by the Shuttle Radar Topography Mission (SRTM). Space Shuttle Endeavour in February 2000 and used an interferometric radar system to map the topography of Earth's landmass between latitudes 56 degrees south and 60 degrees north. The data were processed into geographic 'tiles,' each of which represents one by one degree of latitude and longitude. The northern part of the continent consists of a system of basins and plateaus, with several volcanic uplands whose uplift has been matched by subsidence in the large surrounding basins. Many of these basins have been in filled with sand and gravel, creating the vast Saharan lands. The Atlas Mountains in the northwest were created by convergence of the African and Eurasian tectonic plates. The geography of the central latitudes of Africa is dominated by the Great Rift Valley, extending from Lake Nyasa to the Red Sea, and splitting into two arms to enclose an interior plateau and the nearly circular Lake Victoria, visible in the right centre of the image. To the west lies the Congo Basin, a vast, shallow depression which rises to form an almost circular rim of highlands. 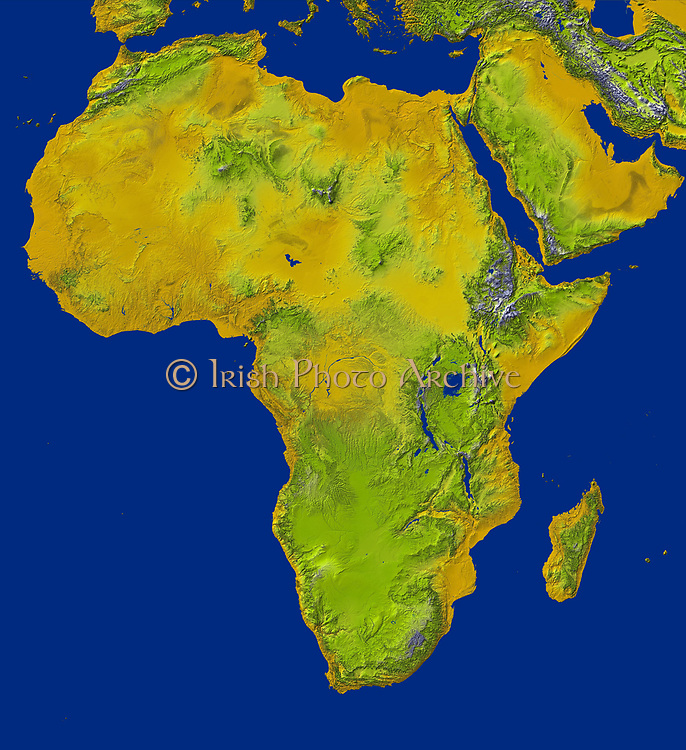